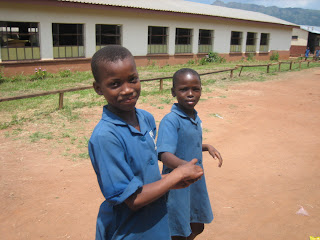 These are 3 of the highschool kids your donations are supporting! 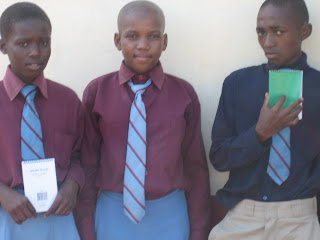 These are 6 of the highschool kids your donations are supporting. The one third from the right was first in his class last year. He is not in uniform because he wasnt planning to go to school this year because he couldnt afford it. He was so happy when we told him he'd been giving an Annie's Family and Friends Scholarship!! :) 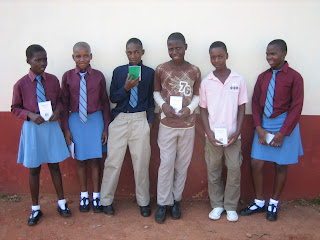 One of the girls who we were going to support declined our offer. She said she has a nanny job that puts food on the table (she is in a child-headed household) and she said if she went to school she would have to quit the baby-sitting job and therefore would not have food to eat. Many of the children walk long distances to get to school which is not helped by chronically empty stomachs. The one little boy we are supporting, Siphesihle, said that his sister dropped out last year because she couldn’t concentrate on school work because of her hungry tummy.

Felicia giving me a Birthday hair-do of about 1,000 braids!! 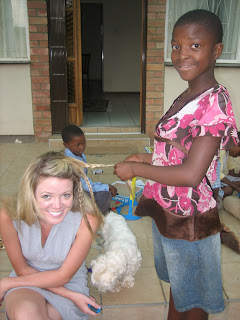 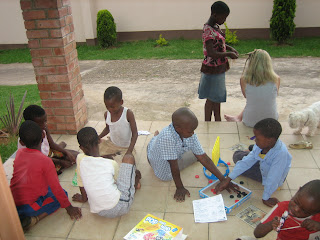 This afternoon we had a lecture at Baylor Pediatric HIV clinic on infant HIV victim nutrition. We learned a lot about the protocol for treating malnourished HIV-victims and to my pleasant surprise, they use Plumpy’nut as a treatment!! If you know my obsession with plumpy’nut as a miracle cure for malnutrition, you would understand my crazy excitement upon hearing this news!! If you don’t know what it is, I suggest you google “Anderson Cooper Plumpynut 60 Minutes” and watch the most amazing video about a development from a French Food Scientist that has cured hundreds of thousands of babies in Africa. I even got to taste it!!!! It takes like peanut butter cookie dough!!

We also learned of the AFASS criteria used to assess whether HIV+ mothers are recommended to switch to infant formula feeding from breastfeeding. If these criteria are met: ACCEPTABLE, FEASIBLE, AFFORDABLE, SUSTAINABLE, and SAFE, then the doctors will allow formula feeding… otherwise the WHO and UNAIDS recommendation is exclusive breastfeeding for 6 months and then introduce foods while continuing to breast feed until 24 months. This is due to the typical lack of clean water, sanitation, refrigeration, and money for formula. Many mothers will buy formula for the baby and then neglect the other children due to the lack of money to buy groceries. Or, the mother will not have money for formula so she will dilute cow’s milk with dirty water (some of the “potable” water we have seen contains VISIBLE worms) and thereby the child will die of either diarrhea or malnutrition. There are actually many many more deaths due to malnutrition in HIV-exposed children (meaning the mother has HIV) than infant HIV-related deaths. The great thing about this facility is that they follow American protocols so HIV-infected mothers are treated at a CD4 count at or below 350 rather than 200 - which is typical in Africa. At 200, the mother is already contracting other infectious diseases and thereby exposing her breastfeeding child to them as well. We have been learning a lot and the great thing is, there are two new doctors hired at Baylor so all this week they are holding introductory lectures for them…and Anne and I were invited to them all!! I feel like I am in school… :) 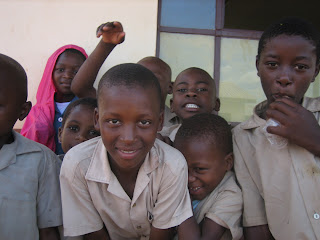 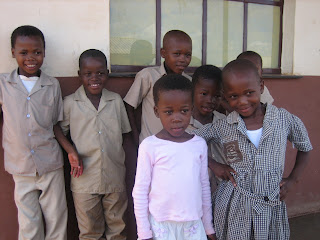 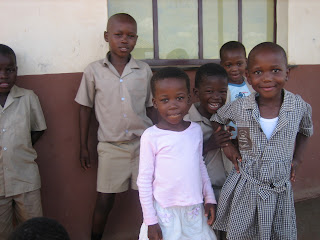 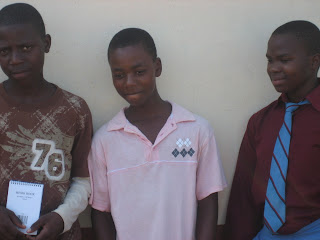 Today we took Purdue bookbags filled with “goodies” to our children you all are sponsoring in Elangeni and we also turned in their school fees. I thought you might want to learn a little more about them. We had a chance to interview 6 of them today:

After her father died in 1999, her mother got pregnant with her 4-year old brother and contracted HIV from her boyfriend. She later died of AIDS in 2007. There are 4 children that live at Celimphilo’s homestead and no adults. Her father was in the army so after he died, the family was entitled to a pension from the government. The 22yr old sister who lives with her boyfriend, takes the entire pension and does not give any to the family leaving Celimphilo, her two brothers (4y & 17y) and a sister (15y) hungry and poor. They sold everything they owned for food. No one in their family helps them because none of her mother’s relatives are still living and the fathers relatives are still mad at her mother so they refuse to help as well. They survive at the mercy of their neighbor’s second hand items (clothing, food, etc) but live in a very poor village with poor neighbors who often cannot help. This is Celimphilo’s first year of formal education and tested into 2nd grade. She is very happy to be at school.

Sibusiso lives with his grandmother, aunt, and uncle (who is dying of TB). His parents both died of HIV/AIDS. They survive on the grannie’s elderly grant from the government and by buying avocados and re-selling them at the market place. The grandmother recently fractured her back and had to be hospitalized. Since they had to pay for the bills, the family did not eat for days.

These two are siblings. Their father died 10 years ago and mother died 6 years ago. They eat only supper on most days which consists of porridge, maize (corn), and greens. They rarely eat meat and they do not eat before or during the school hours. They cook outdoors so when it’s raining (which has been almost everyday since I’ve been here) they cannot cook because they do not have a kitchen so they cook over a fire outside. The rain puts their cooking flame out.

They are also a child-headed household. Nomfundo (age 17) raises her 3 brothers and sisters – including Sizolwetho (age 12). Sizo said that his favorite subjects are math science and English and he wants to be a doctor. Nomfundo’s favorite subjects are commerce and English. She wants to be an accountant. She said that lots of times it is hard because they have no food and they have to go to sleep hungry and go to school without food in their stomachs. She said that they beg for food and clothing from neighbors. She said that the window in their house broke and now, when it rains, the house floods.

Lungelo’s mother died and he now lives with his father who is a drunkard. When his father is in a “bad” state, he runs to his grandfather’s house. His father cannot find a job, so they frequently go hungry. They cook outside, so they have the same problem as most poor Swazis in rural areas when it rains. His favorite subject is science and he wants to be a doctor. He likes to play football.

Njabuliso’s parents died. He now lives with his aunt Nelly who is the RHM with HIV whom I have spoke of before. He likes to play football. His favorite subjects are science and social studies. He wants to be a policeman.

She lives in a dilapidated house with her mother who suffers from TB. She has 6 brothers and sisters and no food. She wasn’t at school today for us to interview her because she was at home taking care of her sick mother.

We had another lecture at Baylor today on PMTCT (prevention of mother to child transmission of HIV/AIDS). At Baylor, there are 4 prongs to PMTCT:

They do see teenage pregnancy but very few. The majority of their clients are 20-30 years old. Although the life expectancy for women was 33 years old before ARVs reached , they are expecting this life expectancy number to increase after a few more years of introducing HIV testing and ARV treatment. has a maternal mortality of 370 women per 100,000 live births. It is estimated that this number is even larger since it does not take into account all of the women who die during backstreet abortions (abortion is illegal in ).