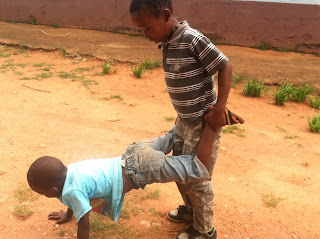 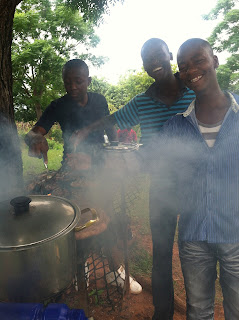 Kids waiting in line for our New Years Eve meal! 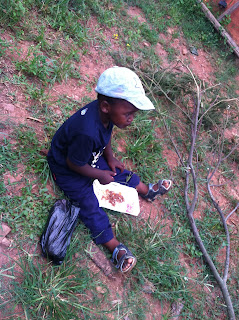 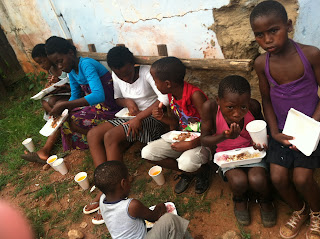 December 31st
Today was a super fun day and it’s not even over!  We hosted a New Years Eve party during the day and dished out almost 200 plates of food.  I was so proud of our grill-masters (Njabuliso and Sizo – two of our double orphans) who did such a great job cooking our meat.  The kids ate salad, slaw, mealies, chicken, beef, woers, and stew.
The kids taught Merindy and I to sing a siSwati song but I forgot all of the words in every verse.  Ill blame it on the heat and lack of sleep – but the kids found it hilarious that I was making up all of my own words! AND I got to finally see Mazwi – he’s doing great and looked very healthy!  He was running around in a little pack of boys all day playing wheel-barrow, tag, and hide and seek. His giggles have to be the sweetest sound to my ears!

At the party I met a professor who has been looking out for the Maziya’s (little Mazwi) while I was gone.  She invited us to come over tonight to light off “crickets” (fireworks) with her children and our littlest ones: Mazwi, Celimphilo, and Samkelo for New Years.   I am excited to see Samkelo and remind him how proud I am that he has taken such great care of his brother and sister! Samkelo recently called upon the professor to ask for money to go to the hospital for Mazwi.  Now with our new GHFP emergency response program, they can contact Bheki and let him know what they need – Bheki can relay that information to us through Facebook and we can have money there in 10 minutes through MoneyGram International.  Technology is amazing these days…

After the party, we went to the Incwala ceremony.  When I’m in eLangeni I feel at home and as one of them.  Never have I felt as out of place as at the Incwala ceremony (except MAYBE when we accidently crashed a Swazi wedding when we were trying to go to church)!  We stood around watching for the King and when he made his grand entrance, we were told we could follow him to the arena.  Apparently to enter this arena you needed things we didn’t have – dancing sticks, dancing skills, and Swazi dress. The girls and boys had to enter different openings.  The guys got the run-around and were never able to enter.  I took the “don’t make eye contact and walk quickly” approach that I tend to find myself doing often in Swaziland.  With this, the girls were inside.  We had to walk past tons of police officers and military men who all extended their arms out in front of them as we went by.  One of our participants decided they were trying to “fist-bump” her and proceeded to make an attempt.  Little did we know, they were actually preparing their pose for the dance and the whole group of Swazis erupted in laughter.  I think we exited about one minute after we entered and that was 59 seconds too long.  We had no idea what we were doing or what people were saying when they were talking about us.  It’s the worst when you try but miserably fail at blending in yet hilarious at the same time.

To be continued about our NYE party… Im excited already!
Posted by annie at 9:22 AM