I can’t even make this stuff up. We were stranded in rural Swaziland…twice today. Thank you Dollar Rental Car for giving us a lemon we endearingly named Blanche! – Day 21


Today started out as usual.  Millions of errands beginning with picking up 450 pounds of meat for the primary school (Thank you FOODOM!!!), checking on the bookshelves, dropping by the secondary school to check on our kiddos etc.  As we had 450 pounds of dead animal in our trunk in oozing plastic garbage bags (barf, I’m vegetarian) I reminisced on the wonderful items we used our Nissan Grand Livina to transport around Swaziland and I said a silent thank you to Dollar Rental car in my mind.  I honestly felt as though we were even, as the number of times we transported less than amazing items (either measured in smell or weight) equaled the number of times our rearview mirror jumped off of the front windshield randomly by happenstance… it was as though Blanche (as we lovingly named our rental car) and I had a deal and we were partners.  Then, today, she disappointed me to the zeroth degree (as Bheki says when someone is really…really bad!).  We were driving in rural eLangeni Village to pick up one of our child-headed household orphans and all of a sudden Kait said nonchalantly, “I’m pushing on the gas yet we are not accelerating”.  This is something we usually joked about as Blanche is as old as the name we gave her and the rural roads are not kind even to the youngest of vehicles; yet this was no laughing matter.

Next thing we knew, it felt like an earthquake even though Blanche was the only thing that was shaking, and we were done for.   Kait tried a few more times to start the car and the earthquakes only continued.  Since we rented the car in South Africa, the company told us we’d have to wait until they were able to send someone across the border into Swaziland which was likely the next day as the evening (and subsequent closing of the border crossing) was already approaching.  So we had two choices: we could either spend the night in the car in the middle of nowhere with only the bag of oranges in our trunk and a sweater the 4 of us could share for warmth against the evening winter air…OR we could hitch a ride back to Mbabane and ditch the car for the evening.

So, we packed up what was in the car and I gave away the 32 oranges we had in our trunk to kids passing by.  So far so good.  As I was hailing whatever was going in our general direction we strike gold when a kombi slows down (local minibus transport).  Sure, we are sitting on each other’s laps and quite possibly contracting tuberculosis from the congested coughing people with no windows down…but we were also going to be able to sleep in our own beds tonight.  Then we hear sputtering and the kombi stops.  The driver says something in siSwati and the locals pack up their things and start to get off the bus.  We sat in our seats thinking that JUST MAYBE they were simply making more room for us so we could have a private –more comfortable- ride back to the city.  But we were wrong and soon we were on the side of the road with the rest of them, the bus had apparently run out of gas.  Then another kombi slows down to pick us up…our lucky day until we realize that there are already 16 people on the 13-seater with 12 more of us on the side of the road eager to pile on.  As we get on the bus, the girls are giggling like middle schoolers circa 2001 at an NSYNC concert even though we are piled (standing room only)  in a kombi 1,500+ pounds over capacity driving around mountain roads as if we were winning the Indy 500. By the grace of God, we jump off unscathed at the first city bus station and the girls are taking pictures and fist bumping each other… I am off to the side by myself finally exhaling from holding my breath for the last 15 minutes and wondering how we were so unlucky today.  Then I guiltily remind myself that we are actually the very luckiest.  This was No. Big. Deal.  Dollar Rental will deliver a new car to us in the morning which Kait & Katy will use to return to the Joburg airport, and inevitably the States, no problem.  There was no emergency to get home today.  The car was left in a (somewhat) easy to locate area… (turn down that one dirt road and keep going past about 45 trees – avoid the big ditch- and as you start inclining up the hill you will see Blanche – somewhat blending into the scenery – on the right). None of us are hungry, we aren’t dying of AIDS, we don’t have dead parents, nor are we otherwise facing some extreme tragedy.  Shame on me for blowing a simple annoyance out of proportion and big blessings to all of our children tonight who are forever stronger than I will ever be. I always say that I came to serve, but Swaziland has so much more to teach me.  I’m still (and forever will be) learning. 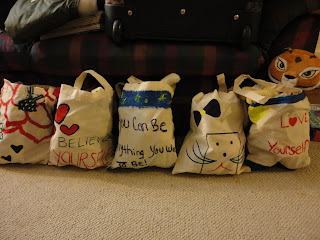 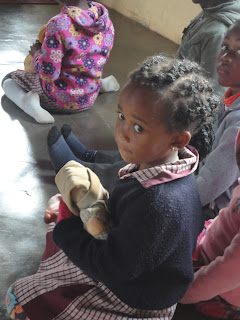 This was one of the adorable 4 year old recipients of the tote bags filled with stuffed animals/dolls.
Posted by annie at 4:37 PM