Day 4
If you’ve ever been to Malindza on a rainy day, you know that the “roads” are a bit tricky to maneuver.  As we were on our way to deliver food to our school, we get to a point where the beautiful red clay soil is saturated like quick sand.  I state to the group that it will be impossible to pass.  Mphendulo (YES! Mphendulo was home from South Africa!!) insisted that it would be fine and that “many cars pass through”.  That’s the last time I listen to a 12 year old!  The car slid from side to side until effectively coating each tire and burying them at least 1/3 of the way in the beautiful red mud.  Pushing the gas only made it worse.  We were stuck.  Then, out of the blue, a man with tattered clothing and a machete appeared and spoke to us in siSwati.  When he realized we didn’t know what he was saying, he went around collecting rocks and placed them meticulously under each tire.  About 20 minutes and a Hail Mary later, we were moving once again.  I sometimes feel guilty about the abundance of blessings that always seem to come my way.  We were in the middle of nowhere.  The man came out of the blue.  We got unstuck and the car was left without a scratch.  Well….there are quite a few scratches from the thorny bushes that suffocate Malindza Village, but that’s another story. 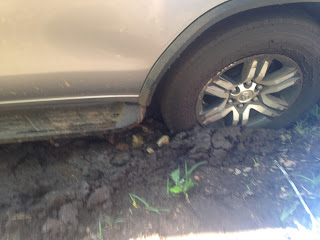 We dropped off the food for our feeding center and some food for the New Year’s Eve party happening later in the day, and took off to deliver more food to our 16 sponsored Malindza high school students.  One of our students failed (for the second year in a row) and the teachers told us that she is slow – perhaps in the States she would receive an IEP and support teachers to assist with her learning, but in Swaziland there is no such thing.  We will try to talk Nomalungelo into going to a trade school to learn catering, sewing, or something of her choosing – but I imagine it will be a very difficult conversation to have as she has dreams of finishing high school. 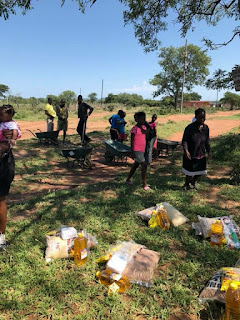 After dropping the food packages off with the high schoolers, we went back to New Hope to help cook and play with the children before serving them their meal.  Often, in the rural areas, children only eat meat once per year on Christmas.  This was their Christmas celebration as the kids ate homemade breaded chicken, potatoes, stew, rice, beet salad, and carrot salad.  The portions were enormous and the young 3-10 year olds had no problem finishing their plates.  Emily had a problem finishing hers, but that was no problem at all as two boys grabbed her plate and ran off play fighting over who was going to eat the leftovers.  We played Play-Ha (duck duck goose), Keep Away, Cat & Mouse, and more.  It was a beautiful day and we were surrounded by endless kids’ beautiful smiling faces. And endless tiny hands asking to be held.


Soon we will head to eLangeni for our annual New Year’s Eve party with our high school kids where Mazwi will scare me to death shooting off our fireworks that would likely be illegal in America… Emily and Brianna have not stayed up past 8pm since we’ve arrived so I am hoping they will be able to muster enough energy to stay awake at the party. Haha  Happy New Year from Swaziland everyone!
Posted by Annie at 7:45 AM