Day 3
All of the feels.
This morning started off with a feeling of GOO.  We went to The George Hotel where Phumzile, the head of housekeeping, has been collecting soaps for us.  She and Mr Sambo were very excited to take part in our Sanitation Across Swaziland initiative as they were thrilled that the used soaps they used to throw away, are now recycled into new soaps and given to the children in rural Swaziland! Once we got home from the meeting, we sanitized soaps by removing any impurities (Brianna was super grossed out by the hair!) and then using buckets of bleach and water….for 5 hours!  Beish did such a great job with the collections and getting more hotels to participate that with 3 people working for 5 hours we only made it through 2 of the 6 boxes! I am so excited to be able to offer so many soaps to the rural communities we support.  It directly translates to increasing classroom attendance and decreasing preventable disease.  And, Emily loved how her entire hands turned into prunes after that long in the water.
Midday the feeling was GRATITUDE for all our generous donors! We went to two banks to pay all of the school fees – all 27 high school students, including Mazwi who officially passed grade 7 (results came out today!).  Every year when such a hefty bill is looming, I get nervous that we will fall short, that we will somehow not be able to pay for all the children.  And thanks to your generosity, we were able to not only add two high school students in Malindza Village (I will be meeting them tomorrow) but also Sifiso’s daughter, Sikhanyiso.


Speaking of Sikhanyiso, for those of you who don’t follow my facebook, my best Swazi buddy Sifiso died a few weeks ago.  He was only in his late 20s and left a 3 year old daughter behind (Sikhanyiso).  We’ve been worried that she will not have memories of her father and tonight the family told me that she doesn’t understand that he’s dead but thinks he’s still in the hospital asking if he is still sick and if his face still has sores.  Thanks to some Shutterfly codes and a generous donation by my cousin Laura, we were able to make a huge soft blanket with Sifiso’s picture on it for her to cuddle as well as a book full of pictures of him hiking with us, choreographing youth dancing, playing with our orphans, dancing in competitions, and being – well the opposite of sick – absolutely overflowing with life!  We met with Sifiso’s family tonight – even spent time with his aunts and cousins!  Sikhanyiso took a while to warm up to us, but after dinner when we dropped her off, she hopped out of the car, turned around, waved and said “BYE!” Tonight the feeling was HOPE.  I am full of HOPE for Sikhanyiso’s future and the future of all  our Give Hope, Fight Poverty children… And you are the ones to thank for that.  Siyabonga kakhulu and goodnight! 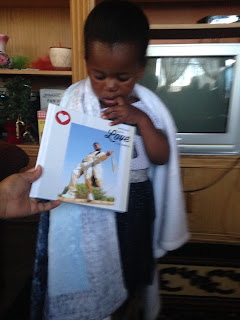 www.ifightpoverty.org/donate.html
Posted by Annie at 11:58 AM