Day 20:
I can only hold in the tears for so long.  I try with all my might to hold it together in front of the kids and have thus far been successful for the past 5-6 years until dinner tonight.  We took Samkelo and Philo out to dinner and a movie.  At first it was super fun, they ordered humungous steaks and were stoked to be out in town. But Mazwi wasn’t around.  I found out that he is on a trip until Monday.  That already bummed me out as I wont be able to say goodbye to him and he didn’t know we were leaving on Monday.  When I told Philo to say goodbye to him for me, she said he was going to cry.  That started the tear ducts but I was keeping the actual drops at bay.  Then I decided to take the time without Mazwi to learn more about how he is doing.  Samkelo said that the nurses at his last clinic visit said “his soldiers are low” and Samkelo is worried.  (In Swaziland they describe the T-cells/white blood cells as soldiers fighting an army against HIV to children.  When the soldiers are low that means the immune system is very depressed and the disease level is much higher and more dangerous) He said that a rash was appearing all over Mazwi’s back and if the rash wraps around his body, he will die.  The second part of that statement sounded fishy and when I dug for more info, I learned that it is an African/Swazi belief and this “condition” (this rash that supposedly leads to death) can only be treated by traditional healers.  “Luckily” for Mazwi, there is one located next door.  After paying tons of money and making Mazwi drink a bunch of concoctions of who-knows-what, he isn’t feeling any better.  That did it.  In a packed restaurant, I am stuck in the middle of the booth trapped with people on both sides of me making it impossible to crawl under the table and hide or dash to the bathroom and scream – both of which sounded like better options than to sit in front of my kids who need me to be strong and happy…and cry. The tears started silently rolling down my cheeks in the booth, I ran to the bathroom, I sat on a dirty toilet seat fully clothed and let it loose with such force that a man actually walked into the girls bathroom to check on me.  I told him I was fine, but I wasn’t.  I hate that Mazwi is sick and wont get any better. I hate that his medicine makes him hurt and he hates taking it.  I hate that there is medicine that will allow him a long life and with less side effects, but he doesn’t have access.  I hate that these amazing children are alone.  I hate that they miss their mom.  I hate that they are hungry.  I hate that they did nothing to deserve any of it.  I hate that I cant do anything about their pain.  The teeny tiny things I am able to do are like putting bandaids on cancer.  No matter how much effort I give, I feel like I’m trying to empty the ocean with a teaspoon.  I cant ever bring their mom back, cure their AIDS, endlessly fill their tummies, make them no longer feel pain or sadness… Today I am feeling defeated and the only thing that will make me feel better is a hug from Mazwi.  I have been practicing saying “I love you” in siSwati and I wont leave on Monday until he hears it.  Every time I leave, I always wonder if Ill get another chance. 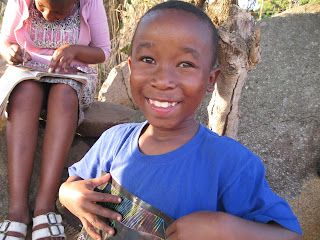 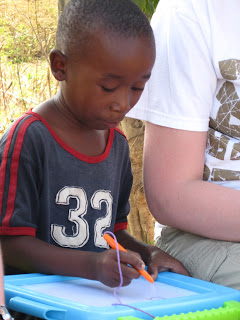 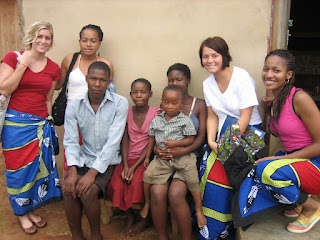 Day 19:
Today when the team went off to see the primary school dance competition, I watched Hannock’s eLangeni boys rehearse for their big day tomorrow.  It was nice to have some relaxing time to bask in the sun as I feel like I have been going nonstop!  When the team was done with the competition they met me at the little kids (Maziya’s) house and we had them watercolor with the 8 neighbor children.  The kids made pictures of themselves and their homes, but the littlest one with bowed legs made the most beautiful colorful abstract picture I have ever seen!!  We took all of our clothes we’ve been wearing for the last 20 days so Philo could have first dibs and I told her whatever she wanted that could fit, she could keep.  Wrong move.  She said she could make them all fit and wanted to keep everything!  That was okay by me as the Maziyas definitely have the least amount of support.  The boys played cars and soccer and the girls used watercolors and markers. Gorgeous afternoon.

We then met up with Bheki.  He told us about an eLangeni soccer team made up of OVCs (orphans and vulnerable children) who don’t have uniforms.  We went to Mr Matata and bought them an entire set complete with numbered jerseys, shin guards, socks, stop watch, 4 balls, a whistle, a captain patch, etc (Thanks Carmel Clay Middle School!).  It was late and dark and Bheki now lives in Matsapha so we thought we were just dropping it off with him and leaving.  But then Bheki tells us to pull into the primary school and park near the light.  We hear running and look and see a team of excited boys complete with a coach rushing to see their new uniforms.  Despite the cold, the boys stripped right then and there to try on their new outfits.  They jumped around, practiced their kicks and hugged everyone – you’d think that they just won the World Cup!  They were so excited!! It brought Kait and Nate to tears.

Sizo asked Sydney today if she was going to come back to Swaziland to see the kids.  Before Sydney ever responded, I stopped her.  I told Sizo that everyone WANTS to come back to see them and everyone loves them, but it is very expensive and not everyone is able to come.  I reminded Sizo of a girl I took on one of my very first service-learning trips 5 years who promised to come back and has never returned.  Every time I come, the kids ask if Erika is with me.  It breaks my heart.  I told Sizo that no matter what, I would always come back to see him and the others.  I told them that when I am 88 years old, like my grandma, I would still be coming even if he had to push me around on the bumpy dirt roads in a wheel barrow.  He said, “ohh annie, I would never do that - I would carry you!”  I wish I could carry all of the children… or pack them in my suitcase. But Im not strong enough, and they wont fit.

My older brother has been asking me what kind of jobs we could create in the village – he wants to help.  I have been thinking the entire time and finally came up with a few ideas.  Bheki said that there is a machine in Matsapha you can buy that churns peanuts into peanut butter.  The schools purchase a lot of that for protein in the school lunches and he thinks with an initial investment of the machine and employing people to plant peanuts that we could start selling to schools near and far.  I love that idea!  Also, as I was sitting under Samkelo’s bountiful avocado tree, I was thinking about how easy it would be to purchase a bunch of blackberry trees, avocado trees, and mango trees and plant them at our children’s homesteads.  They can eat what they want and sell the rest – a totally sustainable and easy business! Im excited already.  If anyone wants to donate to either project, let me know (anniefightspoverty@gmail.com) www.ifightpoverty.org
Posted by annie at 2:34 PM