If you guys know me, you know that Dancing Gogo is my hero, and when my hero fell (from a stroke) early this year, I did not do well.  (Although as you can see from the photo of her in her hospital bed, even a nearly fatal stroke cannot knock that smile off of her face!! Be like Dancing Gogo) 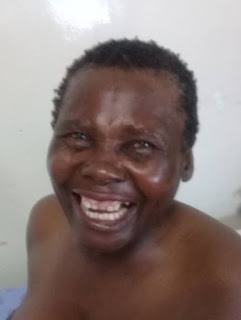 She is the most strong, loving, and courageous person I've ever met.  On our honeymoon when my husband (who is buff...and hot, okay that's off subject) and I dug and dug and hit solid rock when trying to build her a toilet, we gave up after about a foot (and hours) of digging.  We went home and decided to try again the next day after re-hydrating and getting some sleep.  The digging was impossibly hard and the sun was impossibly hot.  When we got to her house the next day, she had single-handedly finished digging the 6.5 foot deep hole and somehow climbed out of it.
That was years ago, years before the stroke that took her down and took my heart down in the process.  In March when I visited her, she was unable to use half of her body.  She was unable to talk, unable to move her arm, and unable to walk....dragging her right foot as she mumbled and hobbled along.  Dancing wasn't even a figment of her imagination.
This time, as we approached her house, I heard her yelling in clear siSwati "MY FRIEND" (as she does) and dancing with the mere help of a thin cane (as she did).  My heart melted.  Dancing Gogo dances again.  It is a miracle.  I am crying of happiness typing this and I am so so so so grateful for everyone's thoughts and prayers.  She has had no medication and no rehabilitation.  It's truly a miracle. And one that is SO needed as she cares for 3 orphans at her homestead including our twins. 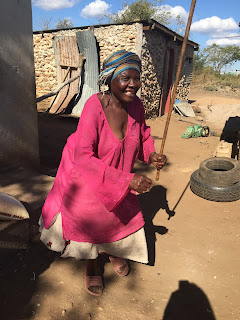 We hung out with Lungelo today.  He talked about his excitement that he's finishing his 5th year and entering his final year of his accounting university program.  He has indicated a desire to move to campus dormitory housing this year (instead of living far away with his great aunt and commuting) because he will have better access to the computer lab, library and study groups.  It will be an extra $520 but it is definitely needed.  Would anyone like to contribute? He's an incredible person who has been with us for over a decade.  He is excited to graduate and give back to the other orphans of his community. Even $20 would help!! Here's his story in his own words: https://us2.campaign-archive.com/?u=99427110133c5667a9eaea056&id=743d5705f3

We rushed to the school today where we picked up Mphilo and Bongani (our helpers and navigators) to help us deliver beds and food to Bonginkhosi and Nomcebo.  HUGE thanks to Susan MacNeil and Carole Juranek for making this possible.  The kids were sleeping in mud homes on a mud floor on top of only a grass mat.  Now they have mattresses and pillows, sheets and blankets! I am going to bed with a smile on my face thinking of them cozying up on a bed for the first time as high school students.  THANK YOU for making their daily life a little bit better. 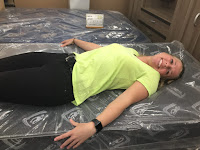 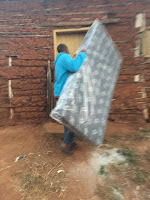 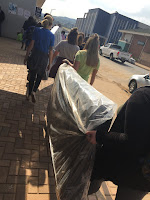 After it all, we drove Bongani home.  I listened to him talk about his new love for Biology class and his recent participation in the choral music program at school (although he thinks the current song selection is boring haha).  I heard him talk about his excitement for his final year of high school and heard an eagerness for his future.  I feel so much gratitude to YOU when I hear hope from them.  You are giving them hopes and dreams.  I am blessed to be the middle(wo)man.  But you are changing their lives.  Thank you thank you thank you.
Posted by Annie at 1:20 PM