It's actually now the morning of day 3. Sorry for the blog's delay... I went to bed as soon as we got home last night at 8pm and just woke up (7am)! I feel like a bear coming out of hibernation! :)
Yesterday was a great but super long day! We started bright and early at eLangeni Primary School where we helped Suzi cook and serve food for 634 kids. One of the "cauldrons" is now unable to be used (the area supposed to keep the fire contained has been damaged which also resulted in fire burning the roof of the entire structure) so Suzi has to use a "portable" cookpot that weighs hundreds of pounds empty and she must carry it herself. You can see volunteer Allison stirring some of the the beans below.

After feeding the children, we went across the street to the eLangeni Preschool.  There were almost 50 kids waiting to pounce as soon as we entered the room. They yelled "take me" which apparently means pick me up and never put me down.  They were the cutest and it made me miss my little one.  (Give Tinlie a big hug and tell her that mommy has her "Africa candy" (as she calls it)). 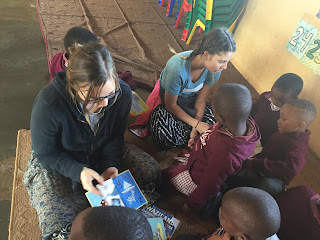 We later delivered food to some of the most destitute child-headed and granny headed homes in Malindza - we also identified homes/locations for the 3 rain catchment systems we will be building thanks to the Power of One foundation grant we received. We decided on the following:
1. We approached a home where it appeared as if no one was home.  As we were leaving, we heard a weak voice off to the side of the home.  An elderly lady was laying under a blanket.  She was the grandmother of the 12 year old orphan we were trying to find.  The 12 year old was at school and the grandmother is paralyzed, laying under the blanket, unable to move, until the grandchild comes home to care for her.  They will receive the first rain catchment system.
2. We met a lady raising 3 small children.  She is actually the sister of the children's grandmother.  The grandmother passed last year.  She moved in to help the kids.  They will get the second rain catchment.
3. We walked into a yard of a woman named Happy.  We noticed that her stick and mud home (see below) was not sturdy enough to accommodate a rain catchment gutter system, so we will build her and her orphaned grandchildren a home before installing the rain catchment system.  She is the mother to two grown boys and now is raising her sister's grandchildren.  Her sister died when her youngest child was only 8 months old.  Now she is 14 months.  She was thrilled to get food as she spent the entire day going door to door asking for food to feed the baby to no avail. As she was expressing her gratitude for the home and rain catchment, she said - "I have asked God to provide for these babies, to give me what I need to care for them.  And He brought me you." What He did was bring the lady YOU! So grateful for our donors who change lives in rural eSwatini.  I cannot imagine trying to raise my daughter (or my sister's kids) in a stick and mud hut without food or water.  Thank you for giving her what she needs to give them a fighting chance!! 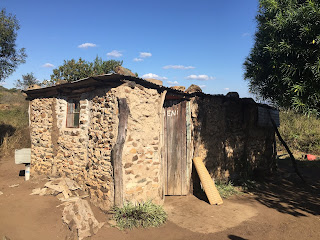 Excerpt from Sage:
Day 2 here in eSwatini and the busy days are in full swing! We started off the day by visiting eLangeni primary school to assist with making the lunches of over 600 students. Rice and beans mixed with some peanut butter and soup mix was on the menu for the day. All 7 of us realized just how weak we are when we learned that Suzi carries very large, heavy pots full of rice, beans, and water by herself every day whereas it took two and sometimes three of us to do the same tasks. After finishing up lunch and helping serve the students, we headed over to the preschool to play some games and entertain the kids for a bit (which I think their teacher appreciated). My workout for the day included picking up and swinging every kid who would yell “take me” while jumping up and down in my face because how do you say no to that? We finished out the day delivering food to several of the sponsored kids homes and preparing for the construction of rain catchment systems that will happen later this week. One of the highlights of the day was seeing dancing Gogo still dancing and smiling after suffering a severe stroke within the past year. Although this is my second trip to eSwatini, I’m still blown away by the gratitude of kids, families, and other individuals who receive support from Give Hope, Fight Poverty in one way or another. But more than that, I’m finding myself more and more inspired by the positive attitudes and resiliency of Swazi people, like dancing Gogo, and think we all have a lot to learn from them.
Posted by Annie at 11:22 PM